Trump’s Good For The English Language

WHEN IN THE US OR BRITAIN, SPEAK ENGLISH. Donald Trump’s retort to Jeb Bush’s rattling off in Spanish on the campaign trail conjures an old joke told in Israel of my youth. It was aimed at the ultra-orthodox Jew who dresses weirdly and won’t speak Hebrew. Here goes:

Walking down the street is a Sabra (a Jew born in Israel), clad in the pioneer’s outfit of shorts and a Tembel Hat. (“Tembel” is Hebrew for silly. The image below illustrates how not even a beautiful Israeli girl can dignify a hat so useless as to provide no protection from the merciless sun.)

From across the street, in Yiddish—the language of the diaspora—an ultra-orthodox Jew clad in black garb shouts obscenities at the Sabra. The minuscule ultra-orthodox community believes that speaking Hebrew before Messiah arrives is heretic and will delay the coming of Messiah (also known as the longest coming in history). For Messiah to materialize, the Jew must remain weak, dispossessed and persecuted—a sickly spirit without a corporeal country to call his own. 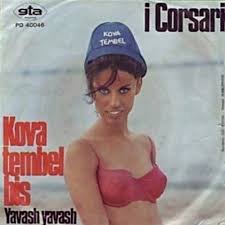 Trump took a jab at Jeb for using Spanish to dismiss the mogul’s conservative credentials. Via CNN:

“‘I like Jeb,’ Trump told Breitbart News. ‘He’s a nice man. But he should really set the example by speaking English while in the United States.'”

The Trumpian reference was to the former Florida governor’s comments to reporters … about Trump’s policies. “‘El hombre no es conservador,’ Bush said, which translates to, ‘This man is not a conservative.'”

Not only was Trump’s visceral retort in defense of English righteous; it was also culturally conservative in the best of ways.

RESTORING TRUTH TO LANGUAGE. Paraphrased, here is a collection of Trumpian straight-talk on the Zeitgeist. (Donald’s “most notable insults,” as The Hill would have it):

* We are led by stupid people. Very, very stupid people.
* Media are dishonest.
* Talking to Anderson Cooper is a waste of time.
* War-all-the-time Charles Krauthammer is an overrated, clueless clown.
* Anthony Weiner is the definition of a perv. [Or, as one Jewish writer you’ll recognize put it, the “Weiner worm is a poster boy for anti-Semitism.”]
* Elizabeth Beck is disgusting. [She’s the wild-eyed attorney who turned a deposition of the busy businessman into a legal brief on pumping breast-milk.]
* The once-great National Review … [Trump translated: NR is no longer great.]
* “George Bush sends our soldiers into combat, they are severely wounded, and then he wants $120,000 to make a boring speech to them?” [Yet another insight about Genghis Bush shared by yours truly. My past post was referring, in particular, to Bush charging the “Helping a Hero” charitable fund for speaking (in tongues) to their beneficiaries. First Bush sent these soldiers to die for nothing in Iraq and Afghanistan. Next he robbed those who came back broken.]
* Penn Jillette’s show is terrible. [A self-evident truth.]

“Do we believe in the gene thing?” roared Trump at a crowd that had assembled to hear him speak in Mobile, Alabama, last month. Yes, he mentioned the G Factor. Trump was touting his genetic lineage; says he comes from a family of high-achievers.

Hasn’t the guy received any briefings on the prevailing linguistic Cultural Marxism—euphemized as political correctness—in the country he seeks to govern? It is an axiom of liberal establishmentarians like Jeb, George and the rest that the nature-nurture debate has been settled, politically, at least.

According to liberal liturgy, of which Trump appears to know nothing; if not for largely exogenous circumstances—all human beings would be capable of similar accomplishments. Many a co-opted scientist will second the political dictum that there is no such thing as general intelligence. Speak, if you must, about the phenotype—even genotype—of all individual traits other than intelligence. As for the possibility of group genotypic intelligence: Don’t go there!

On America’s conflict-of-interest riddled, corrupt press corps, Trump quipped: “Shouldn’t George Will have to give a disclaimer every time he is on Fox News that his wife works for Scott Walker?”

That brings me back to the topic of intelligence, to which Scott Walker relates as Trump relates to the tyranny of political correctness. In the course of vying for the Republican Party’s nomination in the 2016 presidential election, the governor from Wisconsin came up with another “conservative,” cogent idea: equal opportunity fencing. Reflexively—and laboring to show he does not discriminate against Mexico—Walker showed himself to be an indiscriminate bumpkin. To wit:

Walker has called building a wall along the border between the US and Canada a “legitimate issue.”

Illegal immigration and the security of the southern border with Mexico have been major issues in the Republican race for president, but the northern border has not been discussed.

Mr. Walker made the comments in response to a question from a NBC News reporter.

“That is a legitimate issue for us to look at,” he said …

Like the official left, these self-styled “conservatives” are in revolt against nature and reality. Canadian or Mexican; to the Bush and Walker egalitarian, the potential of all people is the same. Therefore all borders must be similarly defended or undefended.

Donald Trump’s tone is unhelpful, Jeb Bush keeps sniveling in that soporific singsong of his. To the contrary. Not for nothing do our linguistic tormentors (like their communist-party mentors) seek to regulate language. For to be vested in linguistic accuracy, is to be vested in the truth. The closer the language we use approximates reality—and, by extension, the truth—the greater the likelihood that our actions will follow.

In this sense, Trump’s blunt, in-artful language is immensely helpful.

ILANA Mercer is a paleolibertarian writer based in the United States. She pens WND’s longest-standing, exclusive paleolibertarian column, “Return to Reason.” Ilana’s latest book is “Into the Cannibal’s Pot: Lessons For America From Post-Apartheid South Africa.” Her website is www.IlanaMercer.com. She blogs at www.barelyablog.com.